“A director must make decisions objectively, act in the best interest of the company, avoid conflicts of interest, and be honest and diligent in carrying out his duties.”


The director is the most important stakeholder in a Singapore company considering that he or she is the person responsible for managing the affairs of the company and providing it with directions about how to go ahead both practically as well as on papers.
Those planning to register company in Singapore must understand the role and various responsibilities of resident director, which is what this article aims to share. 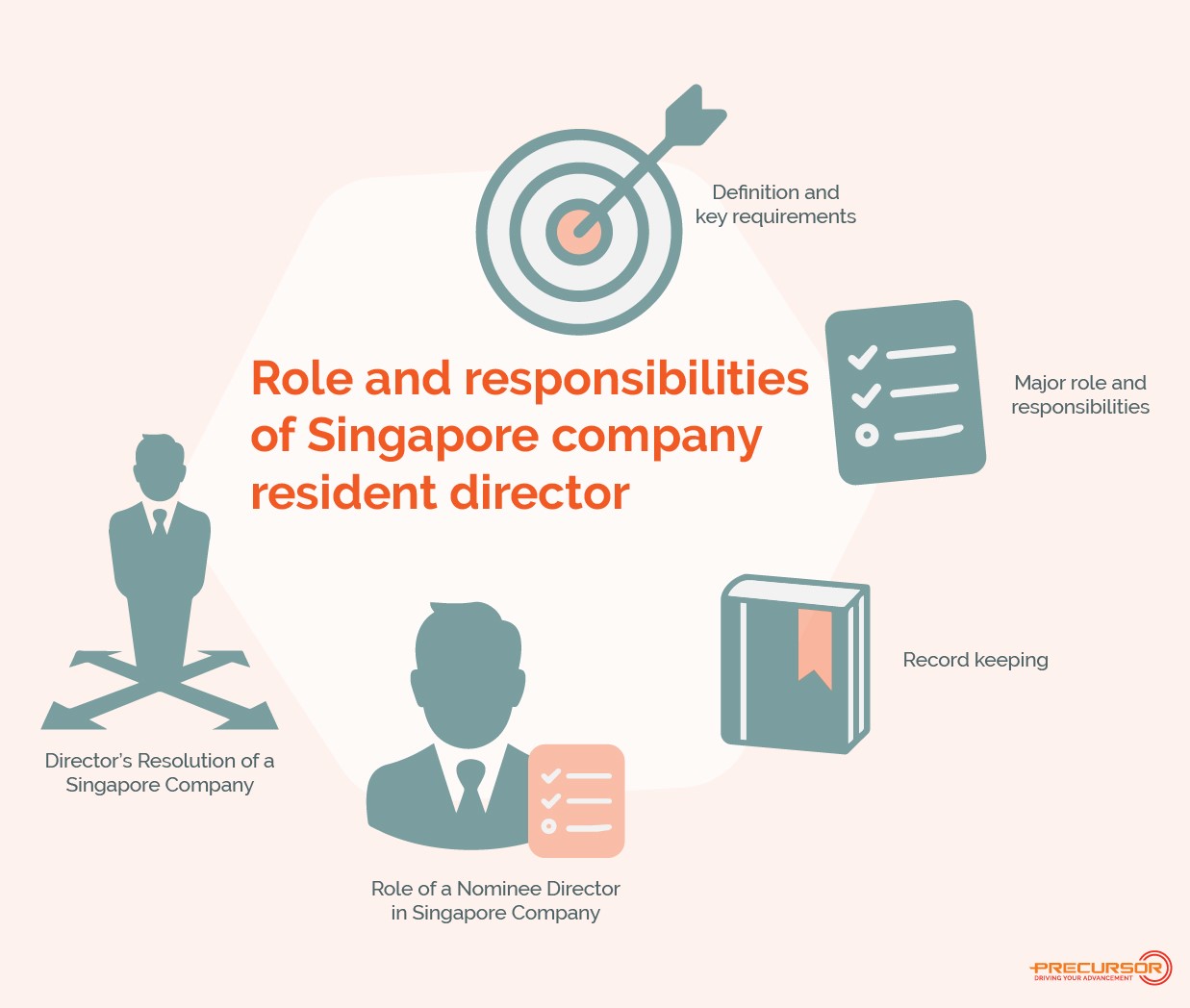 According to Singapore companies act, a director is “any person occupying the position of director of a corporation by whatever name called and includes a person in accordance with whose directions or instructions the directors of a corporation are accustomed to act and an alternate or substitute director”.

“A Singapore Citizen, Singapore Permanent Resident, an EntrePass holder or an Employment Pass holder issued with such a pass to work in the company concerned and who has a local residential address can be accepted as a person who is ordinarily resident here,” notes the Authority.

The director should be minimum 18 years of age and physically as well as mentally fit to carry out director’s duties.


There are two major statutory requirements that a Singapore company director must fulfill. It is penalizing and punishable offense under Singapore law if they do not fulfill the following requirements:
•The Convening and holding of the company’s Annual General Meeting (AGM)
•The subsequent filing of its annual returns by the specified due dates (normally within a month of the AGM)

Normally, during an AGM, dividends are declared, directors are elected, auditors are fixed and their remuneration is determined, company’s accounts and Balance sheets are considered, and any other “special business” as required is conducted.
If the above two are not met, either a penalty is imposed on the company or legal action is taken against the company directors.

It is the responsibility of Singapore resident director to ensure that the company maintains the following registers at the company’s registered office:

Any changes in the content of the above registers must be notified to ACRA immediately.

It’s important to know that ACRA takes late filings or notifications lodged outside the statutory timeline very seriously and company directors are held responsible for such delays.

Director’s Resolution of a Singapore Company

Directors’ resolutions, or board resolutions, which are usually passed by a simple majority during company meetings include:
• Opening of a bank account resolution
• Appointment of company officers including directors, auditors and company secretary
• Any other resolution as indicated either in the Companies Act or in the company’s constitution

The director must inform about such resolutions to company secretary, with whose help such details are to be kept up-to-date and notified to appropriate authorities.

In addition to the mandatory requirements, Singapore company director is responsible for various day-to-day operations of company including:

Role of a Nominee Director in Singapore Company

A nominee director in Singapore is a person appointed to satisfy the requirement of setting up a company in Singapore. Singapore company Nominee director has the same obligations and responsibilities as those imposed on a regular director by the Companies Act and the common law.

For foreigners looking to register company in Singapore, it’s extremely important that they choose someone really trustworthy as Singapore resident director. It’s also important that such a resident director is able to hold and guard company’s confidential information so that as a foreign entrepreneur doing business in Singapore, you are able to focus on your business operations with ease.


At Precursor, we offer the services of providing trustworthy nominee director in Singapore who can not only efficiently be the resident director and comply with all statutory requirements, but a trusted partner in your business that can act in accordance with your visions and instructions.


If you need to speak to us about a general query fill in the forms below
and we will call you back as soon as possible. Thank you.

Precursor is a professional services firm that provides a full suite of corporate and advisory solutions and services.

Through our deep expertise coupled with our strong network, we constantly seek to redefine our solutions and services to uncover synergies and growth opportunities for our people and our clients.

Don’t miss out on our news feed by subscribing to us!